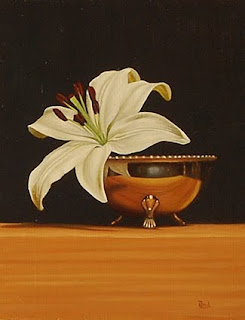 5 1/2 x 7 inches - hardboard panel - SOLD
I enjoyed doing the reflections in the little silver bowl and the 'white' of the lily is always challenging (I use white, raw umber, ultramarine blue and a hint of lemon yellow). 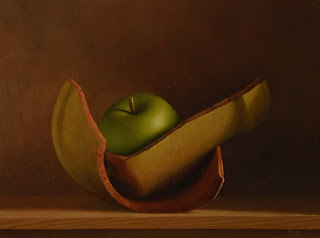 I just thought I'd post another painting of the broken plant pot for your perusal seeing as it has been so long since the last post ;-)
6 comments:

Where does the time go?

I never meant to let so much time go by until this latest post but I seem to be living in a time warp.
I have been experimenting with various panels and mediums and had quite a few failures but i felt it was worth the time and effort as I now seem to have found the ideal panel ... I used to use Belgian linen mounted on Gatorfoam panels but now I just use the Gatorfoam panels themselves (bare of linen). I give them two coats of acrylic gesso and then a coat of re-touch varnish to lower the absorbency.
The above painting was done on a lead primed very smooth linen but I didn't enjoy the process at all. It was very smooth but sucked the life out of the paints and took too long to achieve the finished effect so I wont be using it again.
If you are interested in trying the Gatorfoam go here: windriver arts
you can say you heard of them from me as they don't have the panels advertised on the site and I had to ask specially. They are very helpful :-)
I'll be posting some of the newer paintings on the Gatorfoam very shortly.

The Tallantyre Gallery in the UK has asked for 8-10 paintings for a show in London in April so I have about six paintings on the go at the moment (they have accept five others) so I have been very lucky in my start to the new year :-)

I will try and remember to post more work over the next few weeks (providing I don't mess them up that is ;-) but should I enter the twilight zone you will know that ..... I'll be back!!!!
3 comments:

To be notified when new paintings are available for sale:
paul@paul-artwork.com

My materials of choice:

I buy all my materials here